Wrapping a brisket in butcher paper will allow smoke to penetrate the meat while sealing in the juices.

I wrapped my brisket in butcher paper when the brisket was 1/2 to 2/3 finished during the last few competitions the BBQ team competed in. The results were consistent every time. I recently discovered some folks were using butcher paper to wrap their brisket when I read an article in Texas Monthly featuring a BBQ joint in Austin called Franklin's BBQ. I did a few Google searches on the restaurant to see if I could uncover any secrets. I have never been to Franklin's, but I read they serve some of the best BBQ on the planet, not just in Texas. I also read they wrapped the brisket in butcher paper at some point during the cooking process to aid in creating a moist and tender finished product, and I decided to conduct a little experiment to see if butcher paper was the magical key to perfecting brisket

I first discovered there are several different types of butcher paper. Some types have a wax finish on one or both sides. Others are made from recycled paper and are pink in color. I chose the old-fashioned brown butcher paper with no wax on it. I found a large roll online and had it shipped to my house. I think it is three feet wide and about 1000 feet long. This should last a couple years... The important fact here is I read Franklin's uses the kind of paper without a wax finish, so that is what I used. 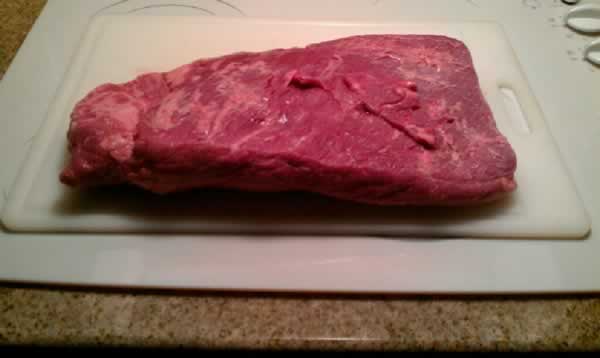 For this trial I wanted to use a simple rub, so I coated the brisket with a nice layer of Kosher salt, black pepper, granulated garlic, and paprika. I pulled the brisket out of the refrigerator about 2 hours before I wanted to put it on the pit. I don't usually put a cold brisket on the pit unless I am in a hurry. Taking a brisket out of the refrigerator two to three hours before cooking is a good idea in my book! I wanted to smoke it low and slow so I heated the pit to 230 degrees F, and tried to maintain that temperature during the whole smoking process. I feel 229 degrees F is the magical temp, but what is one degree? I used a Choice brisket because I wanted a good cut of meat. Your end product has a lot to do with what you begin with so always choose good cuts of meat.

The trick to wrapping a brisket in butcher paper is to wrap it tightly, ensuring the brisket is incased with about 3 layers of paper.I used masking tape to seal the paper around the brisket when I felt it was wrapped correctly. I did not want any air between the paper and the brisket. After the brisket was wrapped tightly, I put it back on the pit fat side up and continued the cooking process. I wanted the internal temp to reach 185 degrees before it was done. At that point I took the brisket off of the pit and put it in a small ice chest for 3 hours. The brisket was still at 155 degrees after 3 hours of rest.

When I unwrapped the brisket, I was as surprised as a 5 year old boy unwrapping his new train set on Christmas day. The brisket crust was beautiful! It was about 1/4 inch thick and there weren't and burnt spots on ithe brisket. The appearance was very consistent and cooked evenly throughout. When I sliced the brisket I was pleased to find an abundance of moisture. The meat was very tender and had a perfect smoke ring. The flavor was rich too. 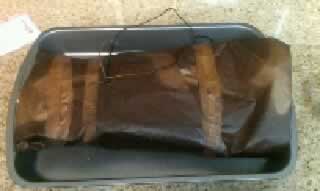 I am a firm believer in wrapping the brisket with butcher paper, and I will continue to use it during BBQ competitions and at home. I have used foil to wrap briskets in the past, and I have cooked one mean brisket that way, but the meat may loose it's true "brisket" texture as it can be steamed by the foil. A brisket finished in foil will most certainly turn out tender, but it takes true skill to finish one in foil and get the true, non-wrapped look of a perfectly cooked brisket. I personally don't like steamed meat, and I would rather eat a slice of meat from a brisket that hasn't been wrapped in foil. 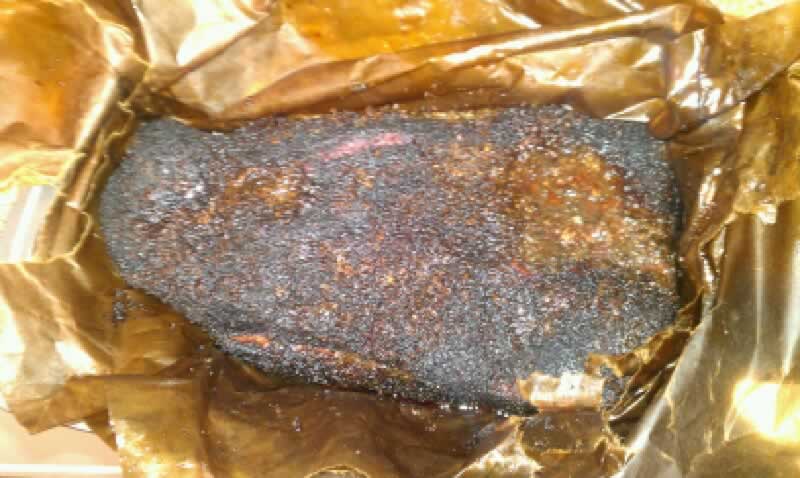 I recommend trying this method to compare with other methods of smoking brisket! 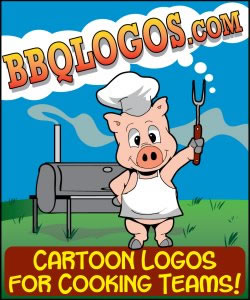